What an amazing time we had in Paris this past week! I’ve already filled you in on my time at Louis Vuitton, Louboutin, Victoria Beckham, etc. But I have yet to fill in you on our time spent at Hermés!

We were so lucky and blessed to have our friend Barry Peele, who now lives in Paris from LA, set us up with the most amazing private showings at some of the great fashion houses. Needless to say, Hermés was one that I was really, and I mean REALLY, excited about. We got to go to the main store, Hermés Faubourg Saint-Honoré which opened as Hermés Boutique in 1889, and has this fabulous museum that’s a destination for other designers to go to for inspiration. Since it started making saddles, it’s very horse driven with much of it’s decor and is rarely shown to the public. The Hermés garden is located on the roof and this is where he took lunch daily. What a magnificent walk back through time and I was beyond inspired for my Lisa Rinna Collection on QVC from the few hours I was able to spend there. 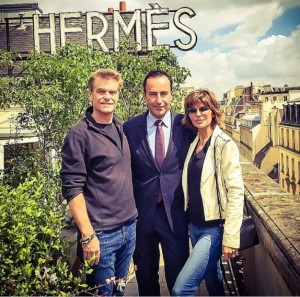 Another fabulous highlight was the work room where they were making one of a kind, original Hermés pieces for their private clients. This was truly extraordinary!! I had no idea that you could custom order a Hermés bag! You simply work with them to come up with the idea and piece and they will put it together for you.

We saw photos of a private jet the size of an Airbus 320 that was all in Hermés leather and furniture…. Private yachts done in Hermés. Picnic boxes made out of that gorgeous Hermés gray. Brandy boxes with glasses and on and on and on…. Can you even imagine? I couldn’t until I saw it for myself.

The designer of The Row is now designing their ready to wear collection and it is beautiful! If you are a fan of the Row like I am, you’ll get a kick out of this: Harry asked, “What’s The Row?” I said, “Well! It’s a line by Mary-Kate and Ashley and they just won the Womenswear Designer of the Year award from The Council of Fashion Designers of America!!” As if he should know this, right? Anywho, the line is gorgeous.

At the end of our visit, Michael took us down to the first floor and there had to be at least 50 people waiting in line to buy Birkin bags or some kind of Hermés bag. Can you blame them? Then Michael presented me with my first ever Hermés scarf and showed me 10 different ways to wear it. What a thrill! We all weighed in on picking it out and the one the girls picked for me, which we will all share, of course, has leopards on it.

Of course it did! 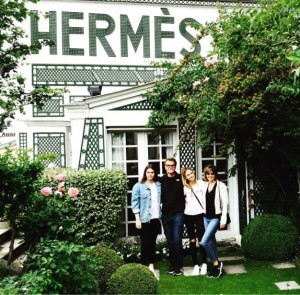